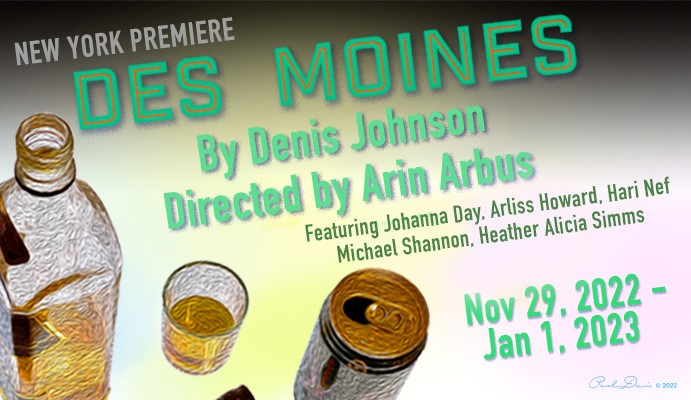 In association with Elizabeth Cuthrell, David Urrutia, and Evenstar Films

In a seedy apartment on the edge of Des Moines, an unlikely assortment of people come together for an impromptu party that takes them, by the evening’s end, on a dam bursting ride down a stream-of-consciousness deluge. Downing depth chargers and singing karaoke, they struggle with the strange and unholy trinity of life, death, and sex in this work filled with dark humor and mystery. “What I write about,” Johnson observed, “Is the dilemma of living in a fallen world and asking why it is like this if there’s supposed to be a God.”

Michiko Kakutani in her 2017 Appraisal of Denis Johnson in The New York Times observed, “He used his startling gift for language to create word pictures as detailed and visionary, and as varied, as paintings by Edward Hopper and Hieronymus Bosch, capturing the lives of outsiders — the lost, the dispossessed, the damned — with empathy and unsparing candor…There is a fierce, ecstatic quality to Mr. Johnson’s strongest work that lends his characters and their stories an epic, almost mythic dimension, in the best American tradition of Melville and Whitman.”