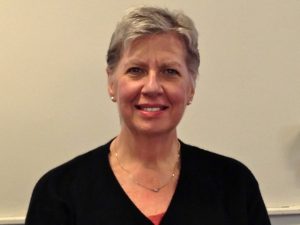 Beth Prevor has over 28 years of experience in the field of disability with a focus on Deaf and hard of hearing populations.  At Hands On, she has produced more than 500 sign-interpreted productions at the Roundabout, New Victory and Public Theatres as well as the Brooklyn Academy of Music, Radio City Music Hall and Central Park, among others.

In addition to her leadership role at Hands On, Ms. Prevor is the Director of Interpreting Services for the New York City Department of Education, where she supervises a staff of 20 administrative sign language interpreters and 50 classroom paraprofessionals, who provide services for Deaf children, parents and staff.  She also consults with other arts and community organizations on offering cultural programs and services to disabled populations.

Previously, Ms. Prevor worked as Program Coordinator at New York University’s Henry & Lucy Moses Center for Students with Disabilities.  She was also Director of Operations for the New York Society for the Deaf.  Ms. Prevor currently serves on the Advisory Boards of the Rhinelander Children’s Center and Lincoln Center’s Department of Programs and Services for People with Disabilities.  In addition, she has advised for the New Jersey Theatre Alliance, New York Deaf Theater and Hospital Audiences.

Earlier in her career, Ms. Prevor was a freelance theatrical stage manager, working on and off Broadway as well as in regional theatres.  She holds a B.A. in Theatre from Brooklyn College and an M.A. in Deafness Rehabilitation from New York University.

Terra Mackintosh is an award-winning actress, producer, and writer. She spent many years in the theatre in New York City, both as an actress and producer. She originated multiple roles in new plays, receiving awards and critical acclaim for her performances. She made her feature film producorial, screenwriting and casting debut with ‘Best Summer Ever,’ an original movie musical made with a fully integrated cast and crew of people with and without disabilities. The film was a SXSW 2020 World Premiere Selection, awarded the SXSW 2020 Final Draft Screenwriters Award, a SXSW 2021 Spotlight Selection, and a NYTimes Critic’s Pick. Terra also served as the Executive Assistant and Communications Manager at Artists for Peace and Justice (APJ) from 2015-2016, during which she produced multiple fundraising events and concerts in support of children’s education in Haiti. She lives in LA with her partner and their dog, Tusk.